She says: “I need help finishing this manuscript. I’ve been working on it, off and on, for almost four years. I don’t know where to go next.”

What she means: “What if I suck? What if no one reads my book? What if I’ve wasted four years on this already?”

He says: “I’ve never written a novel before, but I have this great short story that I want to develop into something. It started as just a few hundred words and I’ve developed it to about 2,000. But now I’m stuck. I’m not sure what to do. I really want to write this, but I’m pretty much convinced nothing more can be said.”

What he means: “What if I suck? What if no one reads my book? I feel stuck and blocked and have no idea where to turn.”

She says: “I’ve always had this idea to write fiction. For the last 20 years or so, I’ve only done non-fiction and deadline writing, but I’ve harbored this dream of penning my own novel. Recently, it’s been bugging me deep down that I haven’t done something about this. But I have kids and a husband and a full-time job. I’m just not sure I will ever have the time to write what I want to write.”

What she means: “What if I suck? What if no one reads my book? What if I actually follow up on my lifelong dream and it turns out to be a disaster?”

Whoa. I’ve been there.

Fear is the voice in your head that lies.

“Putting yourself out there could be embarrassing,” it says. “If you take time to follow your dream, it could be a complete waste of time. Other people in your life might be unhappy if you’re not as available for their needs.”

In 2001, I took my first reporting gig at a prominent newspaper. I was in the midst of a divorce, raising an infant, miles from family and friends. The stress of a dissolving marriage with a tiny baby is more than enough. Add that I was nearly a decade older than my Ivy League colleagues and, in my eyes, lacked the experience and skills, and I was downright terrified.

Fear convinced me that my boss was sure to discover I was a fraud, that I couldn’t write. And then I would lose my job, my house and possibly my ability to take care of my son. What’s more, I allowed those thoughts to bind me so tightly, I couldn’t write a word without deleting it five times before committing to it.

I messed around with my words and my self-confidence so much, my work became garbage. It was under-reported. Details were missing because I spent more time dealing with the fear of writing than I did on my job of reporting.

It did not get better with time. A few months in, I became paralyzed, completely blocked – desperate to do my job and simultaneously scared to death of actually doing it. Every day, I expected to be called into the corner office and fired.

I earned my BA in journalism in 1995, and had hopes of reporting for a living since I was a teenager. I’d dreamed about this job for almost 15 years. I knew my anxiety was holding me back. But I didn’t know how to fix it.

Then the strangest thing happened. The fear bottled up inside my gut turned into complete and utter indignation. I got real.

The job I wanted – talked about, envisioned and ultimately begged for (that’s another story) – for more than a decade was in my lap, as though someone had hand-delivered a pretty pink box with everything I ever wanted inside. Yet I was letting my fear take it all away.

I was going to write. I was going to feel the fear and do it anyway. Even when it meant taking notes during an interview with a particularly powerful politician while my hands shook. Even when it meant knocking on the door of a woman whose car collided with her boyfriend’s, instantly killing him. The higher the stakes, the better. I became known for thorough reporting and exceptional deadline writing, the very skills I struggled so much with in the beginning.

What I inadvertently learned was a quirky, yet universal thing about fear: The only way out is through. I was good enough. Smart enough. Talented enough. But it took the risk of losing my dream job and my lifestyle before I would examine those fears in the light.

And it wasn’t that scary after all.

You can do this.

It’s so easy to get stuck thinking in terms of how things should be. Of how we want to be perceived. No one gets married planning for a divorce later. No one takes a job expecting they can’t do it. But when the shit hits the fan and the pressure explodes all over you, remember you still have total control. You choose how to respond.

Forget everyone else. You want to write? Then write.

You don’t need help to become a writer. You’re either literate or you’re not. What you need is a boost in confidence. You need to believe in yourself.

What if I suck? What if no one reads my books? What if I do it wrong?

The beauty of writing is you cannot do it wrong. Even when you jot down complete and utter crap, you’re teaching your brain to develop creative muscle and training yourself to say what you want to say. That’s HUGE. That is saying yes to your voice. And that is more than most people do in a lifetime.

Think about how incredible it would feel to write that novel, short story, or thing you’ve been dreaming about writing for as long as you can remember. 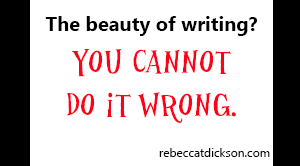 If you want help polishing a manuscript or breaking out of your writer’s block, check out my four-week writing course, or contact me for a consult.

On writing and courage :: Confessions of a Dirty Blonde

6 things you can do NOW to get your writing unblocked