I’ll get right to the point.

I didn’t use the advice everyone gets about how to make money as a women entrepreneur. In fact, I did the opposite.

And RebeccaTDickson.com made more than one million in sales inside seven months.

Here’s my disclaimer: I obviously can’t promise you will get these results, or any for that matter. Your results will vary due to a multitude of factors.

Back to how it happened for me.

NOTE: This was a new business in a market where I was far from a household name. In fact, I’d spent the previous 5+ years as a writing coach. So if you think I was able to leverage my brand, think again. I was starting off cold, just like you.

I kicked it off with a high-dollar launch (for CCC), a ton of Facebook ads ($21K) and a Facebook group to host it all.

But you can’t run the same program year-round and make the same money. (If anyone can get what you’re selling any time, there’s no rush to buy, no feeling of exclusivity. And you want both in order to make money. More about that later.)

So I started experimenting with other methods.

Below, I’ll reveal the model I used to build my business to $1.2 million.

In the end, I created my own system.

Here are five ways I broke the rules and succeeded.

Virtually any expert in marketing will tell you the money is in your list. And maybe that’s true. But it sure didn’t work that way for me.

Yes, I emailed semi-regular blog posts, but I rarely made an offer or pitch via email.

Instead, I nurtured my Facebook community and pitched there.

I built my “know, like and trust” factor in that group every day, multiple hours a day. So I had the best engagement there already.

I sell a mix of 1:1 services and DIY courses.

Here’s one of my products, an audio training and two workbooks that teaches you the art of manifesting. Nothing fancy in presentation, but chock full of info and value. 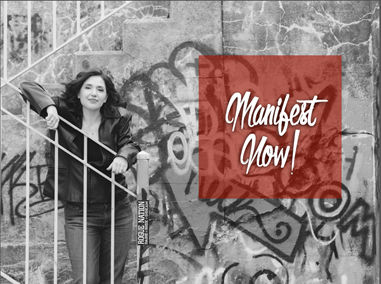 Even a small Facebook group, if you nurture and manage it effectively, can produce serious income.

When I stopped toning it down, trying to fit in and be what I thought people wanted, my business exploded.

Is there anything about my site, from the colors to the headlines, from the images to the profanity, that is remotely neutral or vanilla? 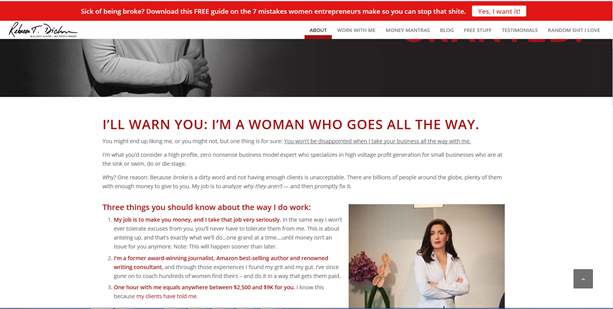 I took a stand. I made the decision I would be exactly who I am and if someone didn’t like it, that would be good for business.

The result was a full inbox (daily) with notes from women all over the world who thanked me for saying what they always wanted to say. Some wrote to tell me they wished they had the guts to drop the F-bomb in their copy. Others said I was blazing a trail that made them more comfortable showing up.

It was inspiring as all hell.

When you show up as yourself, you light the path for other people to do the same. You give them permission.

I built a 7-figure business by telling people the truth – about who I am, what I do and why I can help them.

The most common comments from clients on the phone go something like, “My God, you’re exactly like you are on the internet.”

I take that as a huge compliment.

I realized it had zero measurable impact on my traffic or authority.

Sharing great content all over the internet only gets you so far. Because the reality is…

I’ll say it again: The world does NOT need more information.

What the world needs (and values) is a trusted authority who makes good on a promise and actually fucking delivers.

For me, guest posting meant time, energy and knowledge wasted. Yes, I said wasted. In the instances someone else’s audience became mine, actually opted-in to my site, they were often horrified I said FUCK and left immediately.

Technically, this is the same as #1, but it’s worth revisiting.

Here’s another secret to building your authority: Don’t abandon your prospects.

Let’s say I opt-in to your site and grab your freebie. I dig it. I like you and your stuff. I’m not ready to buy yet – still building the know, like and trust factor and all that. But I’m interested in learning more about you.

So what do I do? Go read your blog? Hunt you down on social media?

How about you share a link to a free private Facebook community and where I can interact with you every day?

It goes miles to build KLT and converts prospects to paying clients much, much faster.

By using your welcome email as a place to invite them into a private community for people just like them, you open the doors wide.

You maximize the value of your traffic.

Most high-traffic authority sites do this at some level. This strategy is even more important for smaller, growing sites with limited traffic.

Think about it. Your prospects can hop on Facebook (where most are every day already) and ask you a question. They can build a relationship. See what you’re about, view your replies to other people’s questions, gauge how well you know your stuff.

Seriously, there is NO SUCH THING as a shortage of clients.

Women entrepreneurs who think they have this problem actually have one of the following:

Clients are everywhere. You just need to know how much you can pay to get their attention.

Once you set up your business properly, you turn on the client faucet.

Facebook is my client faucet of choice. I grew my communities from nothing to more than 12,000 in 14 months (and I closed membership for three months during that time).

Which is fine and dandy, but we all know that Facebook group members aren’t sales. Only sales are sales.

Here’s an ad I ran in December 2014 and January 2015 for a free 10-day challenge. At the close of the challenge, I did three webinars. The result was 500 ideal clients in the challenge and 200 purchases for CCC. 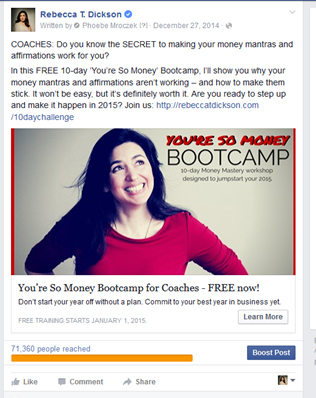 Let’s be clear: My ad budget was $21K for the five weeks leading up to the program. And I didn’t even have $21K to spend. I maxed my credit cards and went ALL IN.

I realize not everyone will spend that much on ads. Hell, if I didn’t have a huge goal, I wouldn’t have spent that much.

But the point is there are clients to be had all over social media. Just decide if you want to spend on ads or show up in groups or on your own pages. How bad do you want it? What are you willing to do to make sure you show up and get your clients?

Frankly, these people need you. When you understand that, your willingness to be visible increases exponentially.

This is the difference.

Between the broke, frustrated entrepreneur and the woman who is an authority making bank.

To make money online as a coach, you only need three things:

Yes, I can help with that. Check out my exclusive membership community. Wildly popular, ridiculously affordable and women are getting shit done like never before.

I know I’ll deliver. Will you?
Scroll to top