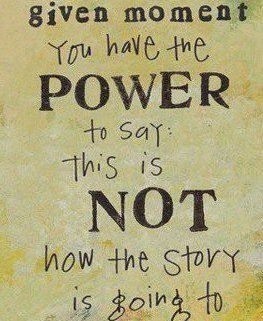 Not so long ago, I was a slave to my anxiety. Afraid to leave the house. Afraid to stay home. Afraid to write. Afraid not to. Afraid to take care of my kids. Terrified of what it meant if I didn’t. At times, I was afraid of eating and sleeping.

I was afraid of being myself. Of breathing. Talking. Doing.

So I sat on the couch, knees to my chest, and worried until I thought I would throw up – and sometimes I did. Yet I did nothing about it.

My husband ran the house, paid the bills, and generally worked his ass off. Meanwhile, I was paralyzed by fear he didn’t understand, have time to digest, or energy to explore. The man was just trying to survive.

If there is a place further away from ready or able to take care of yourself, I don’t know what it is.

By degrees, I morphed from an independent, confident professional journalist into a borderline catatonic lump on the sofa.

So when he said, “We’re going bankrupt,” and “I can’t do this by myself anymore,” and “We need to talk about separating,” I sort of freaked. But not at first.

No, at first, I pretended it wasn’t happening. Any of it. I ignored being broke and the state of my marriage and my fear. Because I wasn’t ready yet.

I couldn’t get up in the morning and take a shower without having a panic attack. How the fuck was I going to make money, work on my marriage and get a grip on my anxiety?

I mean, couldn’t this shit wait just a little bit longer? Perhaps in a year or so – when I may have had time to figure out how to get back to being me?

The universe has its own timeline. More often than not, some of the best things – relationships, job offers, even kids – come before we think we’re ready.

I had to figure it out. Turns out being backed into a corner was divine timing. Because I’m here right now telling you this story.

I decided writing was the thing I should stick with. It never failed me. I found my way onto the internet. I launched a blog, then this website, then a business. I found courage, and ultimately myself, by feeling the fear and doing it anyway. Even though no part of me felt ready.

That ONE decision to do something before I was ready launched a successful career.

That ONE decision to start before I was ready brought me back to myself.

Was it easy? Hell no. Was it worth it? Every fucking gut-wrenching millisecond.

And I learned something critical: We never feel ready to make a major change, leap into the unknown, follow a dream. That’s human nature.

You must find the courage to do it anyway.

I’m telling you this because I’m working on something for you aspiring authors.

It’s going to be big, as in jam-packed, substantial and fucking major league.

It’s going to be fun.

It’s going to be balls-to-the-wall-we-are-doing-this-get-out-of-the-way.

And it’s entirely up to you whether or not you’re invited.

Bottom line: You will write your book. It will be the best goddamn book you are capable of writing. I will make sure both those things happen.

Because that beats the hell out of watching In the Heat of the Night re-runs in your pink Victoria’s Secret bathrobe, wondering what happened to who you used to be.

The Writing Process: Get Sh*t Done

The first sentence is a promise

Writing is f*cking fabulous. So are you.

The Mother of All Query Letters

13 ways to be a better writer
Scroll to top