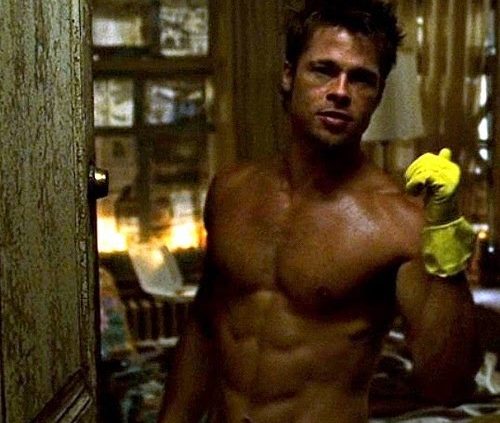 So you’re writing a book. Go you. You plot it out, schedule time to write every day, meet your deadlines and, in general, kick your manuscript’s ever-loving ass. And then shit happens.

The kids need cupcakes for school, help with homework or, say, clean clothes. The dog eats your socks and needs surgery. Your husband whines because you’re burrowed into your computer screen every night instead of snuggling with him watching the game. Your boss needs you to stay late – three nights this week. By the time the weekend comes, all you want is sleep. Screw the book.

BAM. Your writing is waylaid.

It happens to the best of us. But here’s where the men get separated from the boys. Are you going to climb back on that proverbial horse or sit on your ass and bitch about the unfairness of it all? (Three cliches in two sentences. A new record.)

Fight Club is a 1996 novel by Chuck Palahniuk and a 1999 film with Brad Pitt. Every weekend, in the basements and bar parking lots across the country, young men with white collar jobs and failed lives take off their shoes and shirts and fight each other barehanded. Then they go back to those jobs with black eyes and loose teeth – and a sense they can handle anything.

The first rule of Fight Club? You don’t talk about Fight Club.

Professional writers – the people who are burning inside to write their books – will stay up late, rearrange their lives and make deals with their spouses, in the name of writing. They will go back to work on Monday exhausted, but with a massive sense of accomplishment and pride. Because they are doing something that 98 percent of the population never will.

Fight Club is the invention of Tyler Durden (Brad Pitt), projectionist, waiter and dark, anarchic genius. And it’s only the beginning of his plans for violent revenge on an empty consumer-culture world.

“People do it everyday, they talk to themselves… They see themselves as they’d like to be. They don’t have the courage you have, to just run with it,” Tyler says. “In the end, you will thank me.”

Do you know why Tyler says being hit in the ear is perfect?

Because something is better than nothing.

Pain is better than numbness.

Words – any words – are better than a blank page.

Fight club is a secret society that offers young professionals the chance to beat one another to a bloody pulp.

Writers have a secret society of their own. One of solitude and often loneliness. One that leaves scars no one can see, as we vomit up the words and pick at old scabs. 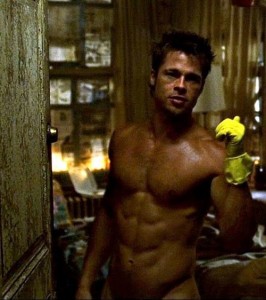 In the movie, mayhem ensues, beginning with the narrator’s condo exploding and culminating with a terrorist attack on the world’s tallest building. It is caustic, outrageous, bleakly funny, violent and always unsettling. You cannot help but take notice.

The goal of every writer: for someone to take notice.

Yeah, it hurts. But that’s the point. Pain reminds us we’re alive. And that is what readers want.

Subscribe in the upper right hand corner and grab my free book A Writer’s Voice, designed to help you write like YOU. So you can say what you want to say, how you want to say it – and stop worrying about what everyone else thinks (and quit writing like a pretentious asshat). It matters.