And at the beginning, the writer had dialogue, and it was awesome. It sucked me in like nothing I’ve read in ages. But as much as I loved the writing and banter, by the fifth or sixth response from character number one to character number two, I wanted to bleach my eyeballs.

“He would write his quote this way,” she scoffed.

“And I wanted to yell at him, loud and long,” she sneered.

“Because no one – no one – can scoff, sneer, gasp, grumble, hesitate, blurt or even cry words,” she snapped.

We don’t snap words either.

When your characters speak, they say things. He said. She said. Sometimes, they whisper, mutter or ask. Anything else – any other, more colorful verb you mistakenly believe will enliven your dialogue – is a way of telling the reader instead of showing.

First, colorful verbs distract the reader from what’s important, which is your fucking dialogue. Don’t mess with that. 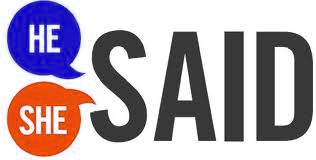 Second, it defies physics to scoff or gasp, etc., words. We can end a quote with “he said, scoffing.” or “she said, gasping.” or “she said, smiling” – you get the idea. But as writers, it is our job to SHOW the reader what we mean. We want our readers to see what we see. One of the best ways to do that is by describing facial expression and/or body language.

“I am not lazy,” she said, furrowing her brow. (anxious)

“You are too,” he said, clenching his fists. (angry)

“Not nearly as lazy as your sister,” she said, looking down her slender nose at him with distaste. (scoffing)

If we meet somewhere and chat, your face is the first thing I see. It’s also the focal point. People connect via eye contact. We notice when her eyes widen, squint, focus inward or dart. We also watch her mouth. We see right away when she presses her lips, flashes teeth, frowns, smiles or purses her lips.

And let’s not forget the rest of the body. We see and make note of gestures as we talk. Writers can describe thousands of movements to show readers what the character feels or how he says something. All readers – all people – are body language experts.

Ninety-three percent of human communication is nonverbal. Think about it. We are regularly fed messages through body movement. What we sense as we interact dictates how we feel and how we act toward the other person.

Readers naturally apply this skill and recognize body language on the page. The way a gesture is described reminds them of how they use a similar movement when experiencing an emotion. It’s called shared experience, and it’s what powers the elusive empathy link between reader and character. Combine your rich dialogue with pieces of a character’s thoughts, and it’s pretty easy to convey a powerful moment.

But it’s not going to happen with Susan scoffing at the end of every quote, while Steve whimpers his replies. Add flavor with description.