I started my business Christmas Eve 2008.

My husband told me to cut the shit and get a job. My family thought I was nuts.

I had no idea what I was doing. Zero knowledge of sales, social media, copywriting, graphics, and on and on.

But I did have a dream. I KNEW where I was going.

I used to dream about this, while the people around me made fun of me.

I share this to show you what is possible when you choose to believe.

What are your goals and dreams?

If you want it, you can have it. But you’re going to work for it.

The thing I unknowingly had in my corner from the start was a series of habits. These are patterns of behavior I started years earlier – for other reasons – that turned out to be my greatest assets in business-building.

If you’re intent on success, use them.

1. I spend an inordinate amount of time imagining BEING in the reality with my goals. I pretend they are here now, and see myself there, with those things and achievements. The big secret to why this helps me at all? FEELING what it would feel like to have those things.

Then I write it down, in detail, and ask myself questions like…

After that, all I need to do is be that woman now.

Most people don’t even have their goals defined, never mind changing their behaviors to match. I started doing this as a reporter when I was after a promotion. I became the woman I needed to be to have that job. I have used it every day since.

If you skip this, your dreams will take twice as long to arrive – if they ever do.

2. I start each day with a plan. Most people do the same shit every day, and wonder why they don’t get where they want to be. If you choose to look at your goals daily, you know right away where you can move toward them. You know what needs to be done to make real progress. Not busywork and hustle. But real, intelligent steps.

3. I have a morning routine. I have the first several hours of each day scripted. Yes, the same mindset exercises, visualization, reviewing of finances and long-game goals. Mandatory reading and much more. All of it reminds me who I am becoming and what I am going for.

4. I check myself. That means I look at what went I’ve done well, what I haven’t – and why. And then I figure out what I need to do in order to improve, and I do it. Not many people are honest about where they, themselves, screwed up. Which also means they don’t take responsibility for improving. They end up doing the same things, repeating the same tasks, and wondering why their results aren’t improving.

5. I never, ever let my emotions lead. I feel like shit sometimes. Angry, frustrated, sad, overwhelmed, anxious as fuck. But whatever happens, I always pay attention to the emotion, get curious about why it’s coming up and dissect it. Pulling them apart actually diffuses them, which allows me to NOT react, say something I don’t mean, do something that doesn’t help, etc.

Understanding is power. Most people let a bad five minutes turn into a bad day, or week. Leaders don’t have time for that. Every minute you allow your emotions to rule is a moment you’re not walking your talk, making waves and claiming the life you say you want.

Habits are everything. If you want something new, you need to be someone who can handle it.

That’s why I created Game-Changer. To show thought-leaders and influencers how to create the certainty and confidence and show up in a big way.

That empire you dream about isn’t going to build itself. It’s your job to do the work – beginning with believing in yourself and executing every day.

Inside Game-Changer, you’ll learn how to build a true success mindset step by step.

Only a few days left to apply.

It’s time for the LAST TOOL inside #30daystorise.

You have 7 days until Game-Changer closes. Make sure you invest in yourself, stretch, grow, learn and become a better version of you. Don’t try to do it alone. 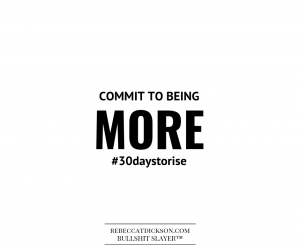 Most people think too much and do too little.

And they hope someone else will tell magically show up to them they are worthy of what they want. That it’s okay to go after it.

None of which ever happens.

Here’s the truth: If you want it, you need to move NOW.

Trust me. I was agoraphobic and had panic disorder. Sitting around thinking about my fear never did a thing for me. But when I got up and took action anyway, the fear dissipated.

Here’s the point: You are not going to get anywhere by reading emails, buying books, listening to podcasts or scrolling through social media.

Today is the last day of #30daystorise.

What did you learn this month that you can apply every day to get you where you want to be?

If you don’t choose to take action, you will be in the same place next year, contemplating what you could have done or should have done, in order to reach your goals.

Planning is nice. Planning is important. But what’s far more important is choosing to DO SOMETHING.

How to know if you have this tool:

How to implement this tool:

If you’ve been thinking about joining Game-Changer, this is the time.

Game-Changer is for women who are done with their bullshit and more than ready to build a rock-solid success mindset.

No more waiting. Doors close in less than a week and only two seats remain. Apply here.