When I woke up, I had no intention of sharing an excerpt of my new book, THE Guide, today. But I ran across three posts from three different people about one issue. It seems the universe is holding up a neon sign just for me.

We’re talking about profanity in writing. More specifically, swearing on your blog. As a long-time, flag-waving cursing machine, you can guess my opinion. What you don’t know is the road I traveled, how long it took me to get there and why I think it’s perfectly okay to say f*ck when you feel the need to say it.

The posts that prompted this are from Don’t Call Me Marge, Something Clever 2.0, and The Insomniac’s Dream. Check those out for the background.

Without further ado, here’s the excerpt of chapter three in THE Guide, called “Two of the most important lessons I ever learned about writing.”

Lesson No. 1 – Old school writing techniques can f*ck up your voice, until you figure out …

Lesson No. 2 – If you think you shouldn’t say it, you better say it.

I grew up in a great neighborhood, in a microscopic town, in a small state. I had a big backyard, plenty of kids my age and a one-mile loop to bike. (I was an epic bicyclist. Great legs, too.) People kill for less.

To me, the most interesting part of all that was the boys. Of the dozen or so kids who lived there, only one other was a girl. Forget pre-teen hormones. My choices were:

1 – Stay in the house in perpetuity to avoid the boys and their teasing.

What’s the best way for a 9-year-old girl to gain the respect of boys her age? Don’t take their shit. Obviously. (And people wonder why I’m such a smart-mouth.)

A clever comeback, a few well-timed biting words, is enough to silence a crowd of even the most obnoxious boys. I couldn’t beat them with brawn. I wasn’t as fast on a bike, as strong a swimmer, or as quick with a punch. But I could still outwit them in a flash.

I became the queen of sarcasm, a crown I still proudly display. I am 40 years old. To this day, if you have a conversation with me in real life, it will be peppered with one-liners and snark. It’s a sick obsession.

Think on that for a minute.

If the best writing is penned the way a person talks, what do you do when your second language is profanity and your third is sarcasm? 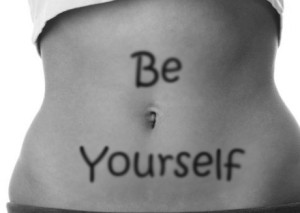 It took me a couple decades to figure it out. But the answer is the same: You still write the way you talk. It’s okay to be you. Because you are awesome. Your message is important. No one can share it the way you can.

If you want your work to be noticed, you have to use words that get noticed. That doesn’t mean swearing (that would be me). It means being you. It means writing without hedging. It means every time you think, Oh my God, I can’t say that, you better motherf*cking say it.

Take off the goddamn tie and nylons, break out your best black lace thong and let it all hang out.

I know. Thank the gods. If it felt like business, you wouldn’t be opening up and connecting with people. And if you don’t open up and connect, if you aren’t vulnerable, your readers aren’t going to give a crap about what you say. (That empathy link I mentioned in the last chapter? This.)

You have to wade through the fear to get to the good stuff.

You have to show people who you are and why they should care. Otherwise, you’re just one of a billion or so writers without a message that stands out. Rather than the author who throws her guts on the page and makes her words sing.

I don’t know about you, but I’ll take a little fear any day of the week if it leads to something lasting for my readers. To know that every time I crack open my chest and put it on the page, someone says, ‘Oh, it’s not just me?’ That’s success by any measure.

So, show some skin. Strip your words down to what your gut says is true.

Four years ago, about the time I started blogging, Sugar started writing her infamous advice column for TheRumpus.net. Her approach to this writing thing inspired the crap out of me. I’ve always been a brash, say-what-I-think kinda gal. But as a reporter, I didn’t write that way. So when I launched my site, I was still holding back. I was worried about swearing. (Anyone who knows me understands how difficult it is for me not to curse.) I was worried about not pleasing my readers.

What I learned from reading her, and others like her, is that the best writing is honest writing. People who eliminate the pretentious crap are easier to identify with. And if your readers identify with you, you’ve found the elusive empathy link – the thing that connects them to you with fervor.

Want more? Check out THE Guide.

Want free stuff? Enter your email in the subscribe box (upper right-hand corner) and grab my free book about the writers’ voice, designed to help you write like YOU. So you can say what you want to say, how you want to say it – and stop worrying about what everyone else thinks. (And writing like a pretentious asshat.)

Influence is an art 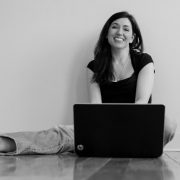 How to find the editor of your dreams

Confessions of a Dirty Blonde :: Four tips for better writing

5 habits of a great writer
7 replies