The New Moon arrived at 6:52 am EDT today, just after the Ring of Fire solar eclipse began at 5:49 am.

This New Moon – especially when paired with a solar eclipse – brings strong energy toward renewal, rebirth and manifestation.

It calls us to look inward, clean out blocks and limits – or at the very least become highly aware of how you block yourself.

This is powerful time for radical honesty and consistent, tenacious ferreting out of your bullshit.

It will be easy to spot and, because of that, easier to shift.

For tonight’s ritual, I chose a simple spell with water (for emotions), local flowers for grounding and protection and herbs for protection and strength. The entire ritual is meant to support you while you stare your fears and blocks down.

Yarrow – the Witch’s herb, for boundaries and protection

Thyme – Strength (Note: This herb is so badass, Roman soldiers used to bathe it in it for courage and strength before battle) 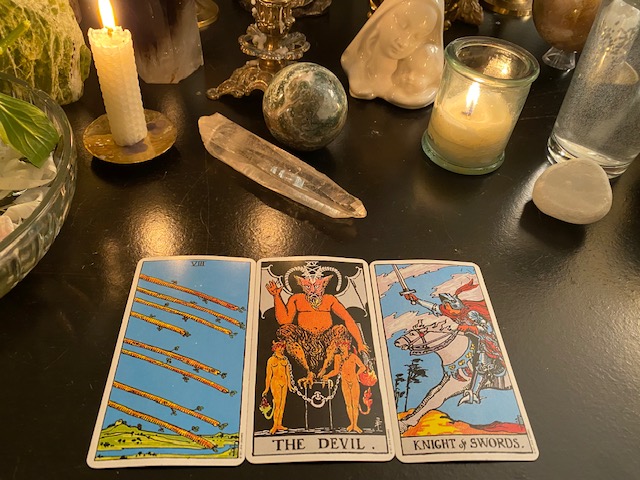 The Eight of Wands says the struggles have cleared and you have the freedom and space to move forward. This is a dynamic card with a high level of energy that propels you forward to reach your goals at a much faster pace than ever before.

This card encourages you to go with the flow. Don’t resist. Everything is moving fast, so make the most of the momentum to manifest your goals and dreams. Allow the energy of the Universe to flow through you and propel you closer to your goal.

Trying to slow things down because you’re not ready or you’re fearful about the unknown will just waste this opportunity. Use the energy instead to fuel positive change and produce significant results.

The Eight of Wands also invites you to be laser-focused with your intentions and actions. Determine what you want to manifest and then align all of your resources and energy to focus on that singular goal. Remove all distractions. This experience can be highly productive, allowing you to accomplish a lot in a short time.

With the Eight of Wands, you can look forward to the rapid completion of a project, but you can also expect to be occupied by something new and even more exciting soon.

There is no stopping you right now as you are just bursting with energy and ideas.

This card is a sign to MOVE quickly to pursue the best opportunities available.

The Devil represents your shadow side and the negative forces that constrain you and hold you back from being the best version of yourself.

Negative habits, behaviors, thought patterns, relationships or addictions are all represented here. This card often is telling us to stop choosing instant gratification at the expense of long-term well-being.

The Devil card often appears when you have been tricked into thinking you have no control over your shadow self or negative forces, and that you can never break free from old patterns.

Deep down, though, you know it’s to your detriment, and you’re only doing yourself a disservice. To break free, start by acknowledging the hold this stuff has on you and the impact it creates on your life.

When the Devil shows up in a reading, see it as an opportunity to bring negative influences into your awareness, so you can take action to free yourself.

Shine light on the patterns that have been standing in your way and, over time, you will loosen the grip they have.

Given that the Devil is a Major Arcana card, it is unlikely that you will be free from your blocks and limits overnight. But know this: It IS possible, and it is up to you to make it happen. This is your invitation.

As with all Knights, the Knight of Swords is a man (or woman) on a mission. Once he has his mind set on something, nothing is stopping him. And as a Swords card, this Knight actively uses the power of his intellect to achieve his goals.

When the Knight of Swords appears in a reading, it’s a sign that you are highly driven, ambitious and action-oriented. You are so highly motivated to succeed that you will stop at nothing to pursue your dreams.

The challenges, difficulties and obstacles on the path ahead don’t faze you because you know where you want to go. Move forward with sheer strength and determination to make things happen.

The Knight of Swords suggests that you are quick to take action and tend not to plan ahead, instead preferring to dive right in. You thrive on high levels of energy that propel you forward and inspire you to take action to manifest your goals.

The Knight of Swords reminds you to be assertive in getting what you want. He doesn’t hang back and wait for something to happen. He makes the first move and actively pursuing his goals.

You can harness this energy in your life by being proactive and forward-thinking. See yourself as the creator of your future and be ready to take the necessary steps to make it happen.

Seriously, could the cards be any clearer? You are on the precipice of the life you say you want. Don’t let your head convince you to stop moving.