Healing and Manifesting Ritual for the full moon – Oct 1

THE POWER OF FULL MOON ENERGY

WHY IS ALIGNING WITH THE MOON ENERGY SO POWERFUL?

Researchers at the Heart Math Institute found that the brain has its electric and magnetic field, but they are relatively weak compared with the heart’s, which is about 100 times stronger electrically and 5,000 times stronger magnetically.

Tonight’s Full Moon Cleansing and Manifestation Ritual was nothing short of remarkable.

I chose to create a ritual to honor the Full Moon and give thanks (it is the Harvest Moon after all). I then lit three spell candles:

Simultaneously, I dressed a white votive candle with blessing herbs and prayed over it for wishes of the collective to come to fruition. I asked to be shown the guidance needed most.

Note the speed with which the white votive burned and the dual flame, which indicates high energy and spiritual influences supporting the ritual.

I also did an offering to Isis, Goddess of Healing and Magic, and smudged the altar three times with mugwort and a white feather.

The altar was dressed with sun water and moon water, black salt, mugwort and two amulets – one for health and the other for creative life force.

I then created a list of intentions for us and the planet. As I read it out loud, all the candles began popping and dancing. I set the paper in the center of the three candles and, well, the photos show what happened next…

The yellow candle (confidence) and pink candle (self-love) nearly evaporated instantly, indicating these are the two areas that need the most support in our lives right now – in order for us to express our truth and be a positive force on the planet. The time is NOW to take a stand and do what you have been called to do all along. We have no time for fear.

The third candle (prosperity) didn’t last much longer. A typical moon ritual lasts anywhere from 90 minutes to 3 hours. Tonight, those candles were out in less than 40 minutes. The moon is screaming at us to RISE UP.

Backbone, ladies. BELIEVE IN YOURSELVES.

Lastly, a chant for you:

I release that which is not mine.

I release all obstacles in my path.

I release attachment to outcome.

I release pain and suffering as a means to growth.

I release all that which is no longer in alignment with my highest self for the greatest good – across all planes, all timelines and all levels of consciousness. 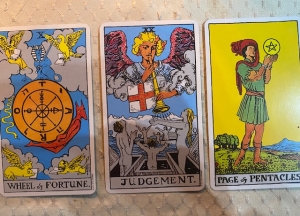 1 – Left – Wheel of Fortune – The time is right for bigger dimensions and better solutions. Expand into what you know you are here to become. There are no coincidences. Fate is communicating with you at all times. Choose to heed the signs and do what you know in your heart is right for YOU.

2 – Center – Judgement – This card is a call to wake up and MOVE. You are being asked to break your patterns and embrace change. You are free to make new, empowering choices and this card says it is time to do so. Forgive the past and let it go. It was only to prepare you for now. This is about rebirth and a new quality of life, if you say yes to your soul.

3 – Right – Page of Pentacles – Make today an adventure. You are embarking on a journey of self-discovery that, if followed through, will have a massive ripple effect. Today is about planting something for yourself and future generations. Legacy building and elevating consciousness are on tap. You are a treasure and the world is waiting on you to believe it is so and act accordingly.

The cleansing is complete. The manifestations are on their way. You know what you have to do.

When in doubt, go back to these cards. It’s crystal clear.